ZERO POACHING OF ELEPHANTS AND RHINOS IN TANZANIA

This past September, I dedicated 3 weeks in Tanzania to engage with the community and the protection of wildlife in the area bordering the Serengeti National Park. Through Peace For Conservation’s first annual Dance For Conservation event, we were able to incorporate native dance and traditional Sukuma song into an anti-poaching community campaign. By empowering the women and men’s dance groups to be the voices of anti-poaching, we are allowing for them to be ambassadors for the wildlife. For example, if a woman’s husband buys bush meat, and she was a part of the group preaching about conserving the area’s wildlife, she will be more likely to stand up and educate him not to buy or transport anymore bush meat.

As this was my first visit to Tanzania, I was not sure exactly what to expect. What I found in the communities was an outpour of hospitality, love, and appreciation. There is still a lot of work to be done with ending the human-wildlife conflict in the area surrounding the game reserves and national park, but through small campaigns like Dance for Conservation, we are heading in the right direction. Dance for Conservation aims to be an annual event held in early September , so if you are interested in joining us next year as a conservation ambassador and volunteer, please reach out.

After the 10-days event, the winning group, along with all of the volunteers, will take a trip into Serengeti National Park. The winning dance group will perform at a lodge in the park, and the volunteers will get a chance to learn traditional dance and song with the women/men.

Pictures from the first annual Dance For Conservation event: 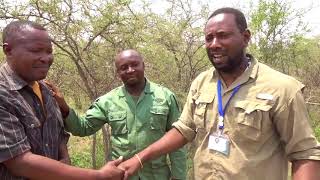 A Visit to WWF Tanzania